This is week three of being off work because of a twisted leg.  I finally found out yesterday that the problem was a contusion.  I had dislocated my medial patella but it was able to relocate itself after a bit of time.  Now I’m basically just dealing with the soreness after the fact.  Any swelling I had at the beginning has significantly reduced itself so my knee looks almost completely normal again.  Nothing is fractured or broken, so unless I’m horribly wrong somehow, surgery is not needed.

When I learned this yesterday, the mental funk I was in right before that dissipated.  I’ve had a few rough days these past few weeks where I felt helpless.  I’ve kept myself pretty busy during this time, devoting the majority of my days to video editing, browsing freelancer opportunities, and researching streaming methods and equipment.  I even got to take a day to go watch Fellowship Of the Ring in 4K IMAX, and that was an amazing experience.  Starting this week, whatever gaming I did I streamed through YouTube, that way I could practice the ‘art’ and other people can be entertained by my shenanigans if they so please.  Despite doing that however, I started to feel something that I never thought I would.  I started to miss my regular job.  Not because of the work itself necessarily, but because it was my main source of income and it provided a feeling of security.  While it’s not at all something I want to do long-term, having it until I don’t need it anymore is a good feeling.  We’re so quick to complain about our line of work until we don’t have it anymore or for a certain period of time, and then we’re desperate to have it back because of what it provided.

I was relieved when I got that call from my doctor yesterday to read the MRI results to me.  While my follow-up appointment is still later this week, which is surrounded by unknowns, I was so relieved to receive any news, any updates, at all.  It was a break from the line of dark overthinking that had been breaking into my mind.  With no current income, certain things in the budget had to be sacrificed for the sake of being able to afford the things my wife and I really need, but the scary part was not knowing when I’d be able to resume receiving income again.  With any luck, I’ll be back to work by next week, potentially with a couple temporary accommodations attached.

Before that call though, I had a lot of dark thoughts swirling around my head.  Worst case scenarios were piling up on my mind, all promising going broke, being unable to provide for our home, and forcing us to take several massive steps backward after all the work I put into getting where we are now.  My wife works full time too, but with that income sliced violently in half, that makes for a very uncertain and unpredictable future, even if that future is short term.  Before yesterday, anything seemed possible, including surgery that would require months to recover from and lots of money spent that we don’t have.  That being said though, this situation reminded me of a time over two years ago when I was walking down the sidewalk after an interview with a temp agency.  I had just been let go from a job that, quite honestly, was toxic and not at all good for me.  I felt hopeless, because I wasn’t sure where to go from there.  Little did I know though, that that interview with the temp agency was the springboard that would take me to a new job that I still have today, and the start of my journey to getting my own first place, getting engaged, and eventually getting married.  I was walking on that sidewalk feeling dazed and hopeless, but the solution was already taking shape without me knowing it.

In my experience, the things I overthought about and blew out of proportion never came to pass, so I have to believe that the same applies here.  I highly doubt I’ll be complaining much when I go back to work, because despite the fact that it’s not where I want to be in the long term, it’s where I need to be until I can work on my own, however long that takes.  If you’re working a job you don’t like and you have the ambition to do something more, that’s already a start.  A coworker at this job of mine actually said something not too long ago that I’ve never forgotten.  We are blessed and lucky to have the job that we have.  If we go into work every day with that mindset, we’ll be mentally healthier for it. 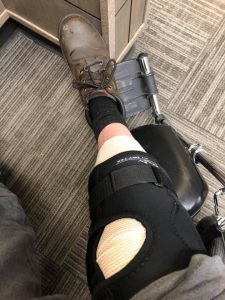