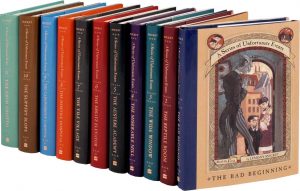 When I was a kid, I was a huge fan of the children’s book series A Series Of Unfortunate Events by Lemony Snicket (real name was Daniel Handler).  I read them, then reread them, and deciphered just about everything I could in them.  To this day, I still think the 2005 film adaptation is severely underrated and the Netflix series was a flawed but effective interpretation of the story.  I loved the world that Daniel Handler crafted, filled with codes, secret passageways, lost love, betrayal, and the darkness of humanity.  At the time I first read them as a kid, they were just fun, dark, engrossing stories, but even I recognized at twelve years old how much depth Daniel packed into them.  As an adult, I look back on them and I see how freakishly close they are to showing off the world of today.

Daniel knew and understood humanity’s worst tendencies, often portraying them in the books through scenarios that, at the time of reading them, came off as goofy and over the top.  Now I think about them and realize they brush up against reality.  The premise of the series is simple at first.  Three young children are orphaned by a fire that destroys their home, and they’re taken to live with their uncle Count Olaf, a greedy, vicious man who wants to steal the enormous fortune left behind by the children’s parents.  The children, Violet, Klaus, and Sunny Baudelaire are resourceful, smart, and inventive for their age, and they manage to evade Olaf at every turn, but it sets them on a depressing path in their lives.  They’re taken from home to home and Olaf stalks them every time, donning a new disguise to trick their unsuspecting new guardian (and it works every time without fail).  This pattern keeps up for a while, until the story expands into involving secret organizations, codes, and gray morality.  The series goes deep into the many, many failures heaped up by humanity itself.  How the adults around the Baudelaire children can’t be relied on for help, and how it takes their own resourcefulness to escape Olaf every time.  While the adults often act goofy, shallow, and dim, there’s a cold truth to the way they are, that not only reflects on past failures of humanity but also holds a magnifying glass to humanity in the modern world.

In order to present the best example of this, no further will you have to look than the seventh book in the series, The Vile Village.  In this book, the children are put into the care of an entire village, which has a rigid and long set of rules (19,833 to be exact).  Rules that are not only ridiculous and illogical by themselves but also wind up contradicting each other.  It’s impossible for anyone to do anything in the village without unknowingly breaking a rule.  As the Baudelaires’ primary caretaker in the book, Hector, says ‘the Council of Elders can tell people what to wear, how to talk, what to eat, and even what to build’.  The village is, simply put, a fascist dictatorship, governed by an exhaustive list of rules that are not grounded in any reality or common sense.  Not only that, but rules are added whenever the Council feels like it, and most books are banned because they contain scenarios where characters are doing things that villagers aren’t allowed to do in real life thanks to the rules.  The village is a setting that has some eerily familiar vibes with the current situation we’re facing in the world today.  Rules and ‘recommendations’ that don’t add up, contradict each other every week, and even the people who follow them as closely as possible aren’t rewarded but instead get new rules or the same ones as before as if none of their previous actions meant anything.

To add one last thing, Daniel Handler also seemed to understand humanity’s tendency for gullibility, the tendency to believe anything at face value.  Things make sense to people, even if they’re not grounded in reality.  The village arrests a man whom they believe is Count Olaf (though they couldn’t even get his name right and thought his name was Omar all along), and the only reasons why they believed it was him was because the man had a tattoo of an eye on his ankle and a single eyebrow, the two primary traits described to each of the Baudelaires’ past and present caregivers.  The man rightfully insisted he wasn’t Olaf, but the villagers settled on the idea that he was, just because of two things he had that Olaf had too.  When the man is murdered overnight, the real Olaf disguises himself as a detective and succeeds in framing the children for the murder, using easily refutable evidence (showing off a hair ribbon and claiming it to be Violet’s even though her ribbon is still clearly on her).  Despite the overwhelming evidence right in front of their eyes, the villagers still side with Olaf.  There’s no common sense, rhyme, or reason for it, they just believe it because they want to.  When the newspaper later prints the story of the Baudelaires murdering the man believed to be Olaf, people claim it’s true because the paper said so.

We see this all the time today.  People will read, watch, or listen to something and immediately decide to believe it despite the overwhelming evidence out there that tells a completely different story.  More and more people are being motivated and driven by emotions, and the people telling lies are not held accountable and are allowed to continue lying.  Many people have compared our world to 1984 or A Brave New World, but I’d take it an extra step further and say, we’re living in the world of A Series Of Unfortunate Events, because I look around and feel a sense of deja vu.  A world where the most ridiculous lies are believed, good people are silenced for telling the truth, and bad people receive almost no accountability and often get away with their deceptions and cruelty, a word which here means ‘inflicting pain and suffering’ (you’ll get it if you read the books).  The one source of hope throughout the series that we can view as encouraging for our own lives is that no matter what the Baudelaire children went through and no matter how they were shaped by the atrocities inflicted on them, they remained resourceful, intelligent, and able to see through the lies and deceit.  They had wisdom beyond their years and wanted nothing more than to protect each other and find happiness in a place where evil couldn’t get to them.  There are people in the world just like them, right now.  You probably even pass a couple whenever you’re out and about.  These people are the future.  Innovation is key in 2021, and just like the Baudelaires used their own innovation to pull themselves and each other out of every situation, we can too.