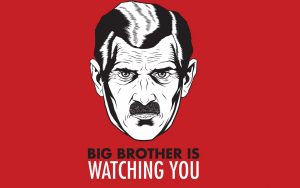 I was only six years old when the planes hit the World Trade Center, and America as we knew it would be forever changed.  I remember very little of my life when I was six years old, but I can say with confidence that most of my childhood innocence didn’t leave me, even as a lot of the world’s innocence dissipated in the years following 9/11.  I do distinctly remember seeing images of the planes hitting the buildings.  I even remember seeing images of people covered in blood from the tragedy.  Those images never left my brain.

The true repercussions of the event didn’t quite hit me until 2014, when I learned who Edward Snowden was and the things he discovered and revealed to the world.  Further research led me to learn more about the NSA and its heightened methods of surveillance, opening my eyes to the realization that anyone could be listening in on my phone conversations or reading my emails and texts.  And as our technology continues to advance with no visible end, so do the methods in which unseen people can invade yours and my privacy.

Now we’re a year and a half into COVID-19 hysteria, where the air is ripe with endless excuses for more power grabs and extensions of control by governments not just in America, but also around the world.  Australia has become a totalitarian prison island, most notably in the major cities, and New Zealand is trapped in an eternal lockdown mode with no direction as to when it’ll end.  Some of the silver lining though is that places like Norway and Denmark has recently lifted all COVID restrictions with no vaccine passport system attached.  Unfortunately, the mainstream news media feeds off of the masses’ fear and profits off of it in obscene and immoral amounts, and as long as their strategy continues to work, they have no intention of dropping the topics that gets people riled up.  People have been spurred on by hate for each other, whether it’s for their political affiliation or their vaccination status.  Division and polarization runs rampant during a time where we should be advancing forward together into an exciting future, not walking backwards into totalitarianism, the death of ideas, and suppression of speech.

So where does this all place me?

I remember telling my dad a couple years ago how happy I was that I got to live in the time I was born in.  Out of all the times in history, I was blessed with getting to live in humanity’s most prosperous time.  I had some awareness of the world’s (and the country’s) problems, but otherwise I was an enthusiastic optimist who tended to dismiss the baby boomers’ and Gen X’s more pessimistic and negative view of the world.  Now, I’m hanging on to that young optimist part of me by a thread.  Too easily now, my mind falls into dark places that envisions a darker future.  Despite only being two years ago, 2019 feels nostalgic, and I would gladly take back the complications I experienced that year if it meant no longer being burdened by today’s complications.  More often now than I did before, I feel like lashing out at other people than using compassion.  Anger, anxiety, stress, and fear are so readily available to be felt with a mere thought, while hope, joy, and peace takes work to stoke.  It’s exhausting to think about the concept of dealing with this heaviness for the rest of my life.

One thing that makes life unfair is that we don’t get to choose when we enter the world.  We either are born into good times or we’re born into bad.  Good times can slide into bad times, and bad times can slide into better times.  Even the wisest people don’t know the future, despite having the knowledge of trends, and I personally think that’s a comforting thought.  I’m here, and there’s nothing I can do about that.  What I can do, however, is do something that creates change, however big or small that is.  One of the silver linings of our current time is that while the darkness feels more oppressive, the light is stronger.  Bad news has been terrible news, but the good news is phenomenal news.  Inspiring, hopeful, and encouraging.

Older people like to say when better times were, whether that’s the 80s or the 70s and so forth, but I like to use what positivity I do have in me to say ‘your best times are yet to come’.  My best times are yet to come, and the state of the world will never be able to prevent that from happening.  What we’re living through now is not permanent.  It will end, even if (I’m a Christian, so I believe in this) Christ’s return doesn’t happen by then.