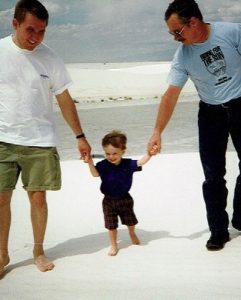 This week has been an awful week.  While it certainly had its ups, few weeks in my life has been as terrible and depressing as this one.  When I walked out of work on Tuesday, I saw the text from my mom telling me to call her when I had the chance.  I knew what to expect when I called back.  I had been expecting this news for a while now.  My grandfather, my mom’s dad, passed away on November 2, 2021, having lost his battle with Parkinson’s.  Dementia had been slowly stripping away his ability to take care of himself and his memories, though some solid parts still remained intact by the time of his passing, were leaving him.  The effects of his dementia became pretty clear to me a few years ago, when he tried calling me and left a message, which mostly consisted of incoherent sentences as he struggled to put his words together.  It became abundantly obvious once he and grandma came to town for my wedding.  The man I knew growing up was almost merely a shell and it was a struggle to have a conversation with him.  I felt like it was impossible.

I never got to properly say goodbye to him.  I hadn’t even talked to him since my wedding, and I regret that.  I should’ve at least tried.  That is a mistake I will never make again.  My grandpa was a good man, a faithful husband, the best kind of father my mother could’ve hoped for, and he deserved better than the lack of attention I gave him in the last two years when he needed attention the most.  We used to talk on the phone for long periods of time, and he was one of the only people I felt comfortable being very open with.  He always had a lot to say but he was also excellent at listening.  He gave great advice but also stayed silent on certain things he felt I needed to figure out on my own.  He was a man with a strong moral compass and was very vocal about what he believed was right and what he believed was wrong.  I remember one time when he took me out while he was in town, and he first took me to lunch, but then decided we didn’t talk enough so he took me to a place outside where we could talk.  He told me that the ‘lid’ of my creativity and innovation hasn’t yet come off so he believed it was time for me to work towards that.  He wanted to see me succeed, reach my full potential, and use the tools God has given me to create, discover, and learn.

Let me touch on politics for just one hot minute to acknowledge the fact that people from my grandfather’s generation are failing us.  Few of them are truly good men or good women, and my perspective on most of them have soured.  My grandpa, on the other hand, was one of the good ones, and it breaks my heart to see men like him go.  Not only was my grandfather strong in his morals and faithful to God and his family, he engaged in prison ministry so that he could interact with the ‘least of us’.  He had a heart for people that didn’t deserve that kind of attention, and who knows where their lives are now because of him?  We can only guess.

This year has been a hard year that differs from 2020.  2021 has a been a year tainted by the deaths of people who were close to me.  The loss of my wife’s grandfather was a punch in the gut, but the loss of my own grandfather has left me feeling numb, empty, broken, and I’ve been quick to tears (I had to pause writing this post several times to cry).

I miss you terribly, grandpa.  But I’m relieved knowing that you’re in a much better place, and my anticipation to join you there only grows more with each day as this world continues to darken.