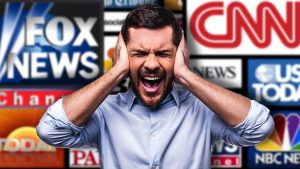 For the past two weeks, yet another hot topic has swept the nation.  The trial of Kyle Rittenhouse, a young man who killed two people and injured another in Kenosha, Wisconsin during the riots last summer.  Yet again, the left, the right, and the middle of the political spectrum are battling it out online, weaponizing their agendas, opinions, and perspectives to present themselves as the only morally just and righteous person in the room.  This weaponizing is in the form of…screaming and throat grabbing on social media festering in a toxic cesspool, people willingly sacrificing minutes and hours that they’ll never get back.  The funniest part about it too is that people think they’re accomplishing something or making a difference through their 240 character limits or however many it is on Twitter.

While listening to thought pieces and updates on the Kyle Rittenhouse trial yesterday, I could feel anger stirring up in me.  That impulse to tweet out a hot take was there and it was strong, and I was thankful that it couldn’t be satisfied due to me deleting my Twitter a little while ago (see my article about that here).  I believe wholeheartedly in freedom of speech, but you also have the choice to be silent on something, either permanently or until the appropriate time comes up, so I decided to wait until I can put my thoughts down in this blog post.  This article is not about whether or not I think Kyle Rittenhouse is guilty.  This article is about how I feel many, many people who associate themselves with the trial are guilty.

The mainstream news media, particularly your typical outlets such as CNN and MSNBC (I don’t like Fox News either, I see those fingers on the keyboard) have taken Kyle and torn him apart limb from limb in a relentless effort to brand him an extremist, a white supremacist, and a cold murderer who was there in Kenosha to kill protestors, whether for fun or because of some white supremacist ideal.  Despite apparently overwhelming evidence that Kyle was acting out of self defense (though I’ll admit that him being there prompts questions), mainstream outlets have branded him every go-to label in the mainstream book.  It’s a devastating sign of the times we live in, where people with no expertise in the fields they’re arguing about eagerly thrust themselves into the role of judge and jury, whether it’s news anchors or people on social media.  The mainstream media has painted Kyle as a monster, even going so far as to mock him during a pivotal moment in the trial where he burst into tears, claiming that his tears are what’s wrong with America (and according to them, what’s wrong is ‘white supremacy’).  If I was to weigh in on my own two cents about his tears, I would say that, guilty or not, the young man is fully aware that his life will never be the same from this point on.  He could spend a lifetime in prison, or he could be ‘free’ but hated by half of the country.  It would be even harder for him to try and secure a fulfilling future for himself since he has this experience in his records, and it’ll always be there.  Even the president of the United States hopes he’s found guilty.  How do you live with that fact?  How can anyone live happily knowing that even the president wishes you were in prison?  Deeper and more tragic than the public opinion of Kyle is that he has to live with the fact that he ended the lives of two people.  No matter what kind of people they were, whether they were innocent or evil, taking lives is a traumatic, heartbreaking experience.

This analysis is why I’m so heartbroken to see how the public has essentially stripped away what’s human about Kyle.  Once he nakedly and honestly displays a very human moment through his tears, whether they come from a good place or not, the public was quick to scoff at it and label it a ‘white supremacist’ problem, therefore instantly removing whatever depth could be there in the name of further pushing an agenda or viewpoint.  Even GoFundMe pulled all the fundraiser pages to help him in court last year.  Why?  GoFundMe didn’t have a specific answer, and Fundly didn’t answer at all.  Facebook was quick to ban people who publicly voiced support for Kyle.  This is a dehumanization of a human being, and the scariest part about it is that it can happen to anybody.  Maybe you think Kyle is a terrible person, a murderer, a white supremacist, whatever.  But the same dehumanization can happen to you, and for doing even lesser than what Kyle did.  Dehumanization is rampant in our society today, crazed and apathetic in mainstream media, brutal and careless in social media.  People that no one knew before one pivotal moment can be taken and transformed into a tool to push an agenda, and when the hype is over and the dust has settled, that person is left to pick up the pieces and wonder if he or she still has any hope left to make a life for themselves, in a world where everyone else has decided that they deserve nothing.