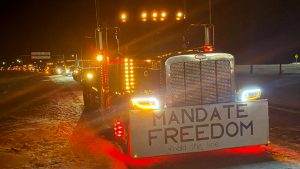 I’m going to come right out of the gate and say it: I stand for and support the freedom convoy that has been going strong up in Canada over the last week.  Thousands of truckers and other people have shown their disgust for government mandates that have negatively impacted people and even destroyed millions of lives around the world.  Having been living in one of the most mandate-heavy states in the US, I know a little bit of what that’s like.  Politicians and bureaucrats have been dishing out mandates like their candy, without presenting any logic or rational reason for dishing them out in the first place.  We know so much more about how COVID-19 works now than we did two years ago, but certain politicians and public health officials still insist on treating COVID related health measures the same way they did two years ago (minus the destructive lockdowns for some).

But one of the most damaging things that the mainstream corporate media and politicians around the world have done in our time is label anyone who speaks out against the COVID-related mandates as ‘white supremacists’ (even though some of the ‘dissenters’ have been completely different races so that makes no sense), ‘anti-vaxxers’, and ‘misinformation spreaders’.  The ones who cheer on the mandates and even implement them are the ones who are hailed as heroes, but the people who go out there to protest against the mandates and stand against government overreach are painted as the bad guys, the villains, the ‘enemy’.  And I’m tired of it.  I’m tired of it and I’m not going to be silent about it.  When BLM ripped through major cities across the country two years ago (Kenosha being one of them, where I used to live and where my grandparents live now), the media and politicians praised them for their efforts to make their voices heard without ever condemning the violence and the building burning, but when a couple thousand truckers decided to honk horns, they were labeled as extremists ‘holding unacceptable views’.  The media complains that these truckers are holding Ottawa, Canada hostage in their convoy, but let’s not kid ourselves.  All of us here are being held hostage one way or another.  If any one of us steps out of line by saying something that contradicts the mainstream narrative, we’re smeared, get our jobs taken from us in some cases, and booted from social media.  That’s not freedom.  That’s not the free exchange of ideas or opinions.  There are people hell-bent on keeping these mandates in place for as long as humanly possible, and with the kind of hatred and smearing they’ve wielded, I’d be hard pressed to say it’s for the sake of public health.

With all this in mind, you must cut me some slack when I say this freedom convoy happening up in Canada gives me hope unlike anything in the last two and a half years.  It’s refreshing and powerful to see so many people finally stand up and say ‘enough is enough’.  Enough of the abuse through mandates, twisted reporting, smearing, cancelling, censoring, and silencing.  And how are they protesting?  By parking their trucks and honking, building a soup kitchen, feeding homeless people, and dancing with reckless abandon.  Oh no, what awful extremists.  What dangerous, reckless, evil people.  Totally worse than those people who burned buildings and harassed and hurt people in my grandparents’ home city.  Yes, totally.  There will always be a few people in a peaceful protest that want to cause trouble.  That one guy waving a swastika flag?  They told him to leave.  I’m not surprised the news left that out.

And the most encouraging part?  This is a movement that cannot be stopped.  The idea to do the same thing is spreading like wildfire across the world, and no matter how much the news has tried to twist their intentions, no matter how much social media has cracked down on it, and even after GoFundMe cancelled their fundraiser, it’s already too late.  The movement has started and the passion I’ve seen from the people leading it is insatiable.  No force in the world can stop an idea once it’s its time (not my own quote) and I have a feeling that that idea is upon us.

Thank you Freedom Convoy 2022 for giving me the kind of hope, spirit, and joy that has been so hard to come by in the last two and a half years.  You’ve provided more of those things than any government can and even cares to provide.