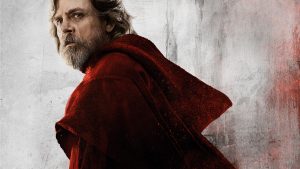 One of the most controversial parts of the Star Wars sequel trilogy was when the main character Rey finally got to meet Luke Skywalker, Jedi Knight and acclaimed legend.  Throughout the first film in the trilogy, Luke was viewed as a legendary hero, the man that defeated Darth Vader and helped dismantle the tyrannical Galactic Empire.  This view was hyped up more and more as the film progressed, until the moment when Rey is finally face-to-face with him at the end, and she extends his father’s lightsaber to him in a nonverbal plea for help.  The film ends here, and when the next film, The Last Jedi, begins, Rey learns a disheartening truth.  All of the anticipation she had had in meeting her hero was shattered by the reality that Luke was no longer that superhero the galaxy always claimed he was, but was instead a grumpy, depressed, old hermit with no desire to help save the galaxy from tyranny once more due to his own personal mistakes.

This is one of the most recognized examples in recent fiction of someone getting to finally meet his/her hero and realizing this person wasn’t what he/she imagined it was.  Though controversial and divisive the example may be, its significance still stands.  It is said ‘never meet your heroes’, and for the first time, I now understand why.  I had heard stories of other people meeting their ‘heroes’ and winding up disappointed with the results, sometimes even being mistreated by those they looked up to.

It was the year of our Lord 2010, when my mom allowed me to borrow her old iPod touch (who uses those anymore?).  I was thrilled.  It was a piece of tech that blew the door open for whole new possibilities.  One of those possibilities was dipping my toe into the world of podcasts.  The podcast world now is far bigger than it was at the time, but I was still able to find one that I really enjoyed: a podcast where a group of guys got together and reviewed episodes of Star Wars: The Clone Wars.  I listened to their show all the way up to the point when they reviewed Star Wars: The Force Awakens to cap off the whole show.  Getting to listen to them discuss Star Wars and get deep with it inspired me to do the same with others and look at what I watched with a different set of eyes.  In 2011, I discovered another Star Wars podcast co-hosted by one of the guests on the former podcast and regularly listened to that.  I even emailed them my own Star Wars related questions, which were answered in one of their episodes.  The experience of getting to hear them talk about my questions was one I’ve never forgotten.  I even won a random drawing contest they had at one time and the prize was a Star Wars novel, the copy of which I still own today.  I had a very short lived podcast in 2012 called Sith Empire Radio, where a friend of mine and I got together on Skype and discussed The Clone Wars and did video game reviews, and when the Star Wars podcaster became aware of it, he offered to include my podcast in his own Star Wars audio media catalog he had put together where people can find all fan-made Star Wars media in one place.  In 2013, I reached out to the podcaster, requesting an email interview to ask him questions about how he first got into Star Wars, how he got to write some of his own Star Wars material, and his process of self publishing several of his own novels.  He was an inspiration enough to me that I wanted to interact with him, and get to know him better.  I was ecstatic when he accepted the request, and from there it got even better.  In 2014, I was able to do an audio interview with him and talk more Star Wars and writing over Skype.  In 2016, I was able to do it again, and in 2019 I finally decided to send him a friend request on Facebook.  I wouldn’t have gotten offended if he didn’t accept it, but in the end he did accept it.  All of this I couldn’t even imagine would happen back in 2010 when I first started listening to him. Occasionally, we commented on each other’s posts and had light discussions here and there.  It was an honor being able to have communication with one of my ‘heroes’ like that.

Unfortunately, some things simply don’t last.  For a lot of people, the last year and a half has shown us what kind of people we really are, and because of that, families have been divided and friendships have ended.  I found out he blocked me on Facebook (I know this because the ability to send him a request again was blocked from me). I tried to rationalize it in my head. Told myself that maybe he had to clean out his friends list and I was a victim of the purge. We’ve never met face-to-face before anyway, and our interactions were few and far between. However, knowing the kind of stuff he posted and contrasting that with the type of stuff I post, I realized it probably had to do with an agreement issue. We had never fought or argued over anything, though he had started expressing disagreements on some of my posts. My guess is that he saw the stances I posted (and I’ve been more outspoken about those lately) and decided he didn’t like them. Having seen some of his own posts, he had very firm views that wildly differed from mine, and honestly I feel that if we ever had a conversation about our politics and views on COVID, we wouldn’t have gotten along. For years, I knew he was someone who would always criticize people for not being ‘intellectually honest’, but the ironic part was that intellectual honesty didn’t come very easily to him either, touting his stances and views as being in the right while almost everyone else is wrong for thinking differently. It was the antithesis of the very thing he claimed to value.  While things could’ve easily been worse, his decision to block me says enough.

I’ll always be thankful for the fact that I started out as a consumer of his content, then got to interact with him directly, then even got to be Facebook friends at one point, but I’m sad that it ended unannounced. It’s a reminder to myself to never put too much faith in my heroes, that even some of the people you look up to the most will let you down. I know that in more ways than one now.