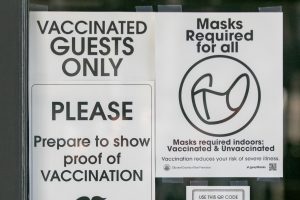 On December 20, 2021, Boston Mayor Michelle Wu announced a new vaccine requirement where people will have to provide proof of vaccination in order to enter or participate in a majority of businesses, particularly entertainment venues like restaurants, nightclubs, bars, and gyms.  Anyone who isn’t vaccinated or can’t provide proof of vaccination at the door will be turned away, barred from participating in civilized society.  She makes this announcement in the midst of loud protest by dozens of Boston citizens, stating, ‘once it gets to the point that it is part of the culture, part of the standard expectation, there’s much less direct challenge in compliance’.

Not until recently have I heard words from politicians in this country that signified such blanket evil.  Trump said stupid things, and I don’t like the man, but I’ve never heard him say that we must view compliance as a ‘standard expectation’ or a ‘part of culture’.  Michelle Wu joins other political leaders such as Mayor de Blasio, Governor Gavin Newsom, and Mayor Lori Lightfoot in implementing vaccine passport systems, which mirrors that of a two-tiered system, where vaccinated people are free and allowed to participate in society as long as they have the proper ‘papers’ and unvaccinated people are essentially shunned from a vast portion of civilization, regardless of their reasons for not getting vaccinated.  It’s a disheartening and tragic thing to witness.  When a precedent such as this is reached, it’s extremely hard if not nearly impossible to step away from it.  Even if governors or mayors pull back these measures, another reason will be found to implement them again.  When a level of power like this is tasted and you find yourself enjoying it, why would you want to give it up?  As far as I’m concerned, it’s foolish to believe that people who are granted a certain level of overreaching power will ever be willing to lay it down.  It reminds me of Palpatine in Star Wars, when he says in Attack Of the Clones, ‘I promise I will lay down this power, once the crisis is averted’.  This ‘promise’ led to three years of nonstop war without a visible end and Palpatine’s eventual rise to the rank of Emperor and the ushering in of a Galactic Empire ‘for a safe and secure society’.

Yes, I know that’s science fiction, and yes, I know it’s Star Wars.  But George Lucas understood to an extent how political power was taken advantage of, abused, and used for a politician’s personal gain.  He was witnessing this firsthand during the onset of the War on Terror.  This wasn’t just purely fiction, it was a reflection of reality.  In the midst of all our arguments over vaccines, masks, police defunding, and cancel culture, politicians are on the move in our cities, our states, and our country to take advantage of all the distractions and push legislation through that’ll have most of our heads spinning in a year from now wondering how we got to that point.  We’re seeing those moves in real time now, and more people need to realize this and decide what’s most important to them, what is it exactly they want to do while they’re still here, and how valuable liberty actually is to them.  We don’t have to live constantly oppressed by evil, political or otherwise.  We have the resources and the technology to make our stand and say ‘no’ and ‘enough is enough’.

In an article by the Washington Post by Kathleen Parker, she states ‘our warring spirit and a predilection to oppose authority precedes our arrival to these shores.  We’re all rebels by virtue of most of us having crossed the pond, so to speak.  Saying no may not be wise in some circumstances, but as a countercultural posture, we customarily view dissent as a basic right’ (you can read the full article here).  I pray that this warring spirit or this spirit of rebellion stays alive in the hearts of the majority.  Our rebellious spirit is one of the reasons why I love this country, and I’m passionate to see it break itself away from the shadows of totalitarianism before it’s allowed to grow and fester into something stronger and ultimately unbeatable.  Let us be countercultural to evil and represent hope and light by listening to each other and understanding each other, not vilifying each other because the TV said so.  By being open-minded and listening, we become more aware of evil when it’s pulling strings, and we have the clearer mind to use the resources available to us to combat it and hold it back.

It’s time for us as Americans to use our voices together. Use it or lose it.